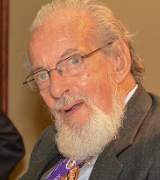 James W. Rinehart (Jim), our wonderful colleague and friend, passed away on November 6, 2020. Jim was a kind, generous, and entertaining man who held strong views but built lasting friendships with a wide range of people. He was loved by many, but especially by his dear wife Jane, who showered care and affection on him through his difficult final years. He was a loving and supportive father to Joyce, Bill, Tim, and Greg. His memory will stay with us forever.

Jim was born in Delphos, Ohio on May 4th, 1933, but his formative years were spent in the Detroit area and Jim retained a great affection for the city throughout his life. He did his undergraduate studies at Michigan State before going on to study for his PhD at Ohio State University. His earliest work was in social psychology and he published significant articles in Social Forces and Sociometry. But like many young Americans in the late 60s, frustration and disillusionment led him in new directions. He turned his attention to questions of social class and the nature of work in modern societies. And he decided to head north, accepting a job in 1969 at the new Department of Sociology at Western University in London, Ontario. Jim would spend the rest of his career at Western and live for most of that time in his home on Chalmers Street in Old North. Jim and Carol, who died in 1999, made their home a gathering spot for friends and family for many years.

Jim was a dedicated, passionate teacher. He believed that cultivating in his students an understanding of how society works would make them more compassionate and engaged citizens. He had a deep influence on many of his students, a number of whom went on to successful careers in the academic world. Jim was best known for his writing in the sociology of work, most notably his book The Tyranny of Work, which was the most widely used text in the field in Canada. Although more of a theorist and commentator by nature, Jim became deeply involved in an empirical study of auto workers at the CAMI plant in Ingersoll, Ontario in later years and the project resulted in his co-authored book Just Another Car Factory?: Lean Production and Its Discontents published by Cornell University Press. Some of his more quantitative colleagues were amused by his conversion to the virtues of survey research!

Jim loved his work and his students, but he also loved to have fun. He was a big sports fan, and his love of sports was a bridge to friendships with colleagues and others who didn’t always share his political views. He was a lifelong badminton player, a jovial if largely unsuccessful poker player, and an enthusiastic darts player. Many Friday afternoons, he would head to the Grad Club for beer and darts. He had a special fondness for the “16”, and he treasured the day he planted all three of his darts in the triple “16”. He loved basketball, especially the NCAA tournament, and considered it karma that he always taught his last class of the winter term on the Monday evening when the final game was scheduled. He would end his class early – it was the last class of the term after all – to ensure he got home in time to pour a beer, light his cigar (always a cheap one), and settle in for the championship game.

Jim Rinehart lived a good life. He was kind, supportive and compassionate. He took the time to help others. He will be missed by all who had the good fortune to spend time with him.